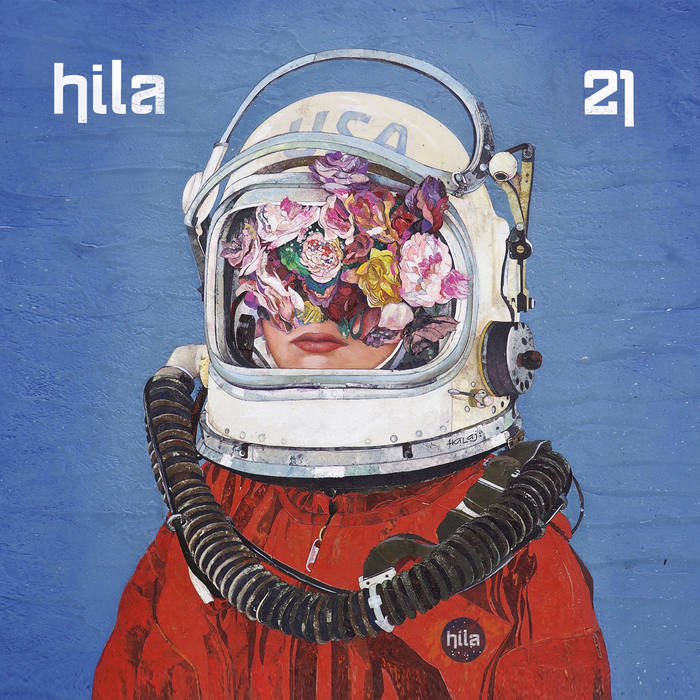 "21" is the well-crafted, sharp and original first album by the duo HILA. The combination of jazz, Los Angeles beat-scene and the vibrations of 80s and 90s Soviet Armenia make it a striking and unprecedented fusion. These kind of nostalgic and unconventional references forcefully shake the codes of mainstream culture to create a sincere, raw and intimate expression.

"HILA" was born from a spontaneous and intense creative impulse between Artyom Manukyan, a Los Angeles-based Armenian celloist and his partner in crime, David Kiledjian aka Dawatile, a French multi-instrumentist of Armenian descent. This project is proving to be a true master stroke given that it only took 21 days for the duo to make it a reality.

"HILA" was made in less a moon cycle but captivates and electrifies audiences upon its first outings. "H.I.L.A" colors the warmth of the Californian "High" with Armenian vibes. The artists chose this name for their creation since both have a close and valuable connection to these locales. This journey began in 2007, on the day Dawatile went to Yerevan, the capital of this small country in the Caucasus mountain to realize a first fusion project centered around local folkloric music genres.

There he was introduced to local musicians including the Armenian Navy Band, one of the country's foremost groups in which Artyom played the bass and cello. In this context, he also met many musicians such as Tigran Hamasyan and Norayr Kartashyan. This will be the beginning of connections between Lyon, Yerevan and Los Angeles. The following year, the two artists will be be seen performing next to Taylor Mc Ferrin at the Jazz à Vienne festival. More recently, they partnered up again when the cellist, who had freshly relocated in California, invited Dawatile to produce his album. As soon as the studio’s threshold was crossed, they decided to postpone this record and create a joint project: Hay (as the Armenians call themselves) / High In Los Angeles. HILA was born at the end of these 21 days of intense creation. The association of Artyom Manukyan and Dawatile is the combination of two visions, two versions of Armenia, two personalities, the reunion of the Eastern and Western blocs.

One grew up nurtured by the sounds of hip-hop and jazz in Europe and the other by art music and Russian-influenced 1980s Armenian folkloric music before moving to L. A., Ca. The cornerstone of it all, the glue that unites everything : Armenia and music. They generate a new identity synthesizing two perceptions, their complicity transcending these cultural discrepencies. To achieve this, they will scour through images of Artyom’s childhood, within the popular culture of Soviet Armenia. Together, they revisit this decidedly retro vibe, based on the work of Caucasian groups inspired by African American music. This background is rehashed and fused with ancestral Armenian sounds. The DNA of the album "21" is molded by these dear influences.

We can also hear the ancestral sounds of Armenia, a country at the edges of both Europe and Asia. The presence on two tracks of Armenian music Master Norayr Kartashyan, infuses the languor of past melodies and traditions. These purposeful anachronistic sounds offer a fantastic depth to this powerful opus. Listening to the album, one can appreciate the successful fusion of styles and influences. Those combinations, however, manage to preserve individual identities only to enhance the art through an adamant musical dialogue.

Being driven by the urge to transpose Armenian musical traditions into a unique universe, the daring artists, offer an innovative combination by blending, for the first time, these ancestral sounds with the world of Los Angeles beat-scene and jazz. An invention largely fueled by the magic strings of Artyom and maestro Miguel Atwood-Ferguson, a pillar of the genre in Los Angeles combined. These associations resonate with a triumphant equilibrium. HILA is musical uncharted territory in which Artyom's cello strings intertwine to ignite the harmonies of keyboards, the machines, the vocals and electronic layers Dawatile pieced together. HILA plays the soundtrack of an adventure set between Armenia around the end of the Soviet era and a mysterious near future.

Artyom Manukyan grew up in Armenia in the 90s. At the time, he studied Russian classical music while learning jazz with assistance by his father, a music journalist. Being an unconditional music lover, he went on to sharpen his skills at the prestigious Berkelee College of Music. Subsequently, he’s been lucky enough to travel the world touring with numerous acts and mainly with the Armenian Navy Band. The group has fostered alacritous success honored by a BBC Award as a crowning achievement. He moved on 10 years ago and made his way to L.A. with his cello on his back. In the City of Angels, he quickly became a popular figure of the jazz and hip-hop scenes thanks to his first album "Citizen". He’s accompanied prestigious musicians such as Kamasi Washington, Melody Gardot, Daedalus, Flying Lotus, Run DMC, Gretchen Parlato, Raphael Saadiq, Clive Lowe Mark, or Vulfpeck. He released his solo album on the cello, "Alone" in October 2019.

Dawatile is a bold producer and multi-instrumentist as well as a passionate and resolute musician molded by jazz. As a versatile artist, he handles and juggles the saxophone, the keys, the bass and composition. Simultaneously, Dawatile produces cross-over projects and soundtracks for the movie industry. He, as well, has had the opportunity to be a part of many tours, including with his electro hip-hop band, Fowatile and more recently with the "Future Kreyol" trio, Dowdelin. Being the ever workaholic, he has under his belt a string of prestigious collaborations with the likes of Talib Kweli, Foreign Beggars, Roy Ayers, Tigran Hamasyan, Mathieu Boogaerts, Voodoo Game and Piers Faccini. His taste for developing new musical recipes and his know-how in production make him a much sought-after album producer. In concert, the HILA duo offers a sober, precise and rhythmic performance. "21" is an aerial and lively album taking the audience on an at times joyous and sometimes melancholic dreamlike journey. The magic of "HILA" operates at the speed of light and positions it already as an avoidable group.

"21" is the well-crafted, sharp and original first album by the duo HILA. The combination of jazz, Los Angeles beat-scene and the vibrations of 80s and 90s Soviet Armenia make it a striking and unprecedented fusion. These kind of nostalgic and unconventional references forcefully shake the codes of mainstream culture to create a sincere, raw and intimate expression. ... more

Bandcamp Daily  your guide to the world of Bandcamp

Featuring Gary Bartz, 5 years of Rhythm Section Intl and an LP of the week by Nicolas Jaar